I have implemented directional light for Practica Boxel. It simulates a harsh distant sun. 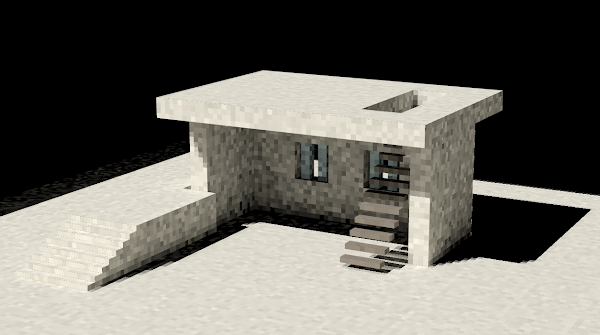 Because there is only one bounce, there are fully black shadows with 0% light in the scene. I'm not sure I like it.

It's main advantage is that it is easier to render in chunks, as there is always just one lightsource, which is always the same. No need to cull lightsources, which simplifies things a lot. As local lightsources pop into view, the delta in light is too jarring, so this circumvents that.

I've decided to go back to my original experiments where I have a night-scene with just 1 torch light.

And with one hand-held light source, I find that a first-person camera is a no-go: because if light and camera are close to eachother, the lighting becomes un-interesting, no shadows, not much indirect light, so the whole GLobal Illumination is wasted on it.

Which leaves me with...

A night-time world, one hand-held lightsource (torch) and a third-person camera.

Think: A 3D Ant Attack clone, set at night, and with Global Illumination.

So, when doing a local point-light, I should modify how I shoot my photons again! I started with a cosine weighted hemi-sphere direction. Then I added directional light. And for a torch, I would need a uniform omni-directional light.

So, blue-noise sampling of a sphere it is, then. Alan Wolfe came to the rescue with his suggestion of using Mitchell's Best Candidate algorithm to create progressive blue noise.

As his approach was O(N³) I had to weaken it a bit, but reducing the number of candidates. I implemented it in C, using 16-threads and also 16-wide SIMD for conceptually handling 256 candidates simultaneously. By leaving it running over-night, with my CPU at full blast, I was able to create a data-set of 2M samples that look reasonably like blue-noise.

2 million sample points, viewed from the inside:

So, night-time-Ant-Attack, here I come...